The original Uno Synth was IK Multimedia’s surprise entry into the world of budget-minded hardware instruments. It wasn’t just a surprise that the company, best known for its iPhone-friendly MIDI controllers and plug-ins, decided to make a synthesizer, but that it also went full analog — an area where it didn’t have much pedigree. The results were mixed, but the general consensus was that the Uno’s core sound was impressive. Now IK is trying to move up a weight class with the Uno Synth Pro — a three-voice paraphonic synth with its crosshairs squarely aimed at the likes of the Korg Minilogue.

Of course, as with most musical instruments, there is no apples-to-apples comparison. So whether you’re better off spending your synth dollar on an Uno Pro or on something else will depend on your priorities. 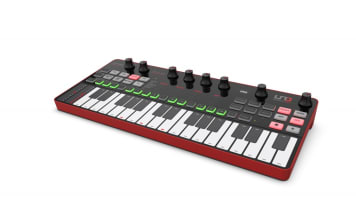 The Uno Synth Pro comes in two different flavors: the standard Pro with a 37-key Fatar keybed and a partially metal chassis; and a smaller Desktop model with a set of touch keys and an all-plastic body. The Pro version costs $650, while the Desktop is just $400. I tested the Desktop model, so I can’t tell you much about the feel of the more expensive one, but if you already own a decent MIDI controller and don’t plan on gigging with the Uno Synth, save yourself the cash; they’re otherwise exactly the same instrument.

Under the hood are three oscillators with continuous wave shaping from triangle to saw to square (with pulse width modulation). There are options for hard sync, ring modulation and FM, plus two envelopes, two LFOs, two filters, analog overdrive and a selection of 12 digital effects. In short, there are plenty of options for sound design, especially when you consider the 16-slot modulation matrix.

Physically, the Uno Synth Pro Desktop is a bit of a mixed bag. The overall construction is plastic, and certainly feels it, but it’s solid enough. The knobs offer a good amount of resistance and the buttons are decent. The same is true of the screen: It’s small but gives you all the info you need. The gray, black and red color scheme can make quickly spotting the controls you’re looking for a bit difficult, especially the secondary and shift functions. (On a dark stage they’d be impossible to find.)

The four knobs at the top are used to change almost all the parameters by navigating a grid beneath it. I’ll admit that the interface isn’t my favorite. But in order to keep costs down while preserving as much flexibility as possible IK Multimedia went with a light-up grid instead of a knob per-function design. It’s a decision I could quibble with, but one that I can accept. Also, it’s worth noting that if you want to get real specific with a parameter it’s better to use the endless encoder to the right of the screen after selecting your target with the four pots to the left.

The biggest problem, however, is with the touch keys and strips. Now, to be clear, this criticism does not apply to the full-sized version with a proper keybed, only the desktop model. But, to be blunt: The capacitive keys and touch strips are not good. They can feel unresponsive. Occasionally, the Uno Synth would straight up fail to detect my touches. And putting the synth in three-voice paraphonic mode seemed to make things worse. The same is true of the pitch and mod strips; sometimes they’d fail to register my touch or react slowly to it. The mod strip in particular is easy to trip up if you move your finger too fast and it has a tendency to jump between values rather than smoothly glide between them. If you plan to actually play your Uno Synth Pro (rather than use an external sequencer or controller) I highly recommend you spring for the full-sized version with the keybed and pitch and mod wheels.

The Uno Synth Pro does have a pretty solid arpeggiator and sequencer, though, so there’s a chance you can get by without having to ever touch the “keys” on the desktop version. There is also a scale mode in the settings that disables the black keys and maps the white ones to the scale of your choice. Which, at the very least, makes it less likely that you’ll sound out of key if your finger lands three millimeters to the right of where you intended.

And look, I get that touch keys are hard to do right. They were bad on the original Uno Synth. They’re bad on Modal’s Skulpt and Craft synths. The Volca’s are slightly better, but still quite cramped. Honestly, the only synth I can think of where the touch keys aren’t a liability is the MicroFreak. (And there are probably people who would disagree with me even on that.)

Many of the frustrations I have with the interface and physical controls are immediately forgotten once the Uno Synth Pro starts making noise, though. In short, it sounds glorious. Especially with all three of its oscillators stacked in mono mode. While the Pro is a three-voice paraphonic instrument, I think it’s at its best when treated as an extremely beefy mono synth. The oscillators have a lot of body and grit to them. The triangle is glassy but dusty and the saw wave just plain rips. Add a bit more dirt from the analog drive circuit and you’ve got a truly gnarly sounding machine for leads and basses.

The oscillators can also be hard synced, there’s pulse width modulation (though no dedicated knob for it), ring modulation and FM for more metallic sounds. The FM function, though, is slightly hidden in the menus, which is a shame. It’s a valuable sound design tool that’s just not as accessible as it should be thanks to some questionable interface decisions.

The dual analog filters are also lovely. The multimode two-pole filter from the original Uno Synth is here and it’s just as juicy as ever. It can be a bit aggressive, but that’s part of its charm and it really hits the spot if you’re into acid basslines. Then there’s a switchable SSI-based lowpass filter with two and four-pole modes. It’s a little subtler than the multimode option, but with the resonance cranked it will self-oscillate and scream.

The two filters on their own are solid enough. But special things happen when you combine the two. They really allow you to start pulling out unique timbres. You can run them in series to create effectively notch or bandpass filters, or in parallel using each to pull out slightly different tones and then combining them into something new. There’s even an audio-in jack on the back, so you can route any instrument you want through the Uno Pro’s filters and effects. It’s just a shame that it’s an ⅛-inch jack instead of a ¼-inch.