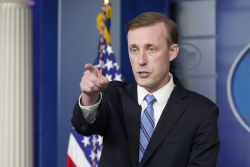 White House National Security Adviser Jake Sullivan figures prominently in a grand jury investigation run by Special Counsel John Durham into an alleged 2016 Hillary Clinton campaign scheme to use both the FBI and CIA to tar Donald Trump as a colluder with Russia, according to people familiar with the criminal probe, which they say has broadened into a conspiracy case.