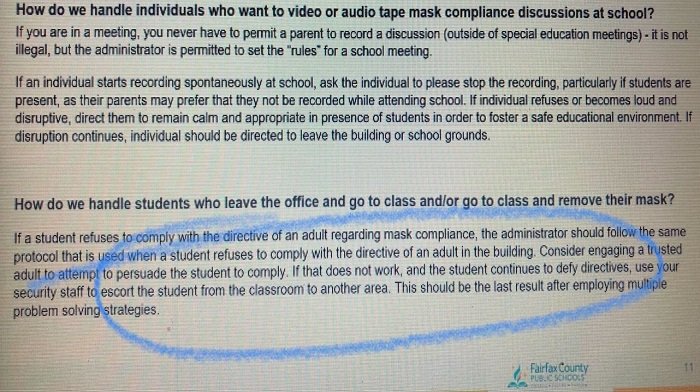 Slides from a presentation to teachers at a Fairfax County Public School in Virginia indicate students who do not comply with mask rules will be provided a separate space and, if they remain non-compliant, may be removed by school security.

The news comes as seven school districts in Virginia, including FCPS, are suing Governor Glenn Youngkin over an executive order requiring schools to give parents a choice to opt out of mask mandates.

“Today’s action is not politically motivated,” the school boards stated in a press release announcing the lawsuit. “These seven school divisions would welcome the opportunity to collaborate with the governor to ensure the safety and welfare of all students.”

“We are disappointed that these school boards are acting counter to parent’s rights,” a spokesperson for Youngkin responded.

“The governor and attorney general are in coordination and are committed to aggressively defending parents’ fundamental right to make decisions with regard to their child’s upbringing, education and care, as the legal process plays out.”

Youngkin’s stunning victory in the gubernatorial race in November was seen largely as a referendum on parental control of their children’s education, something his Democrat opponent, Terry McAuliffe, opposed.

“I don’t think parents should be telling schools what they should teach,” McAuliffe infamously said in the days leading up to the election.

A long-tenured teacher at FCPS, who wished to remain anonymous to avoid potential reprisals, has reached out to The Political Insider, disgusted with the school district’s continued attempts to force masks on their students in spite of Youngkin’s executive order.

“I am definitely disappointed that FCPS is choosing to defy the governor’s executive order,” she tells us. “I do recognize that Omicron is easily transmitted and that is worrisome for many, but I also feel that wearing a mask or not should be the choice of the parents and students.”

“Staff and family members overly concerned about Covid can continue to wear masks,” she explained. “Those who don’t want to should also have that choice.”

Parents, take note. They hate you and your kids.

Isolate Students Who Do Not Comply

The long-tenured teacher at FCPS provided this author with slides from a presentation delivered to school officials on how to handle students who defy their mask rules, in spite of the Youngkin order.

The teacher describes them as coming from “the principal’s briefing with FCPS leadership.”

One slide indicates students who refuse to wear a mask and have parents that are unwilling to bring them home as a result will be segregated from their classmates.

“A space will be provided to support students not wearing a mask,” the guidance reads.

It is remarkable how they word what is clearly isolation of a student from their peers as “support.”

A follow-up bullet point indicates that repeat offenders of the mask policy will need consultation from the region and “Special services (for students with disabilities).” 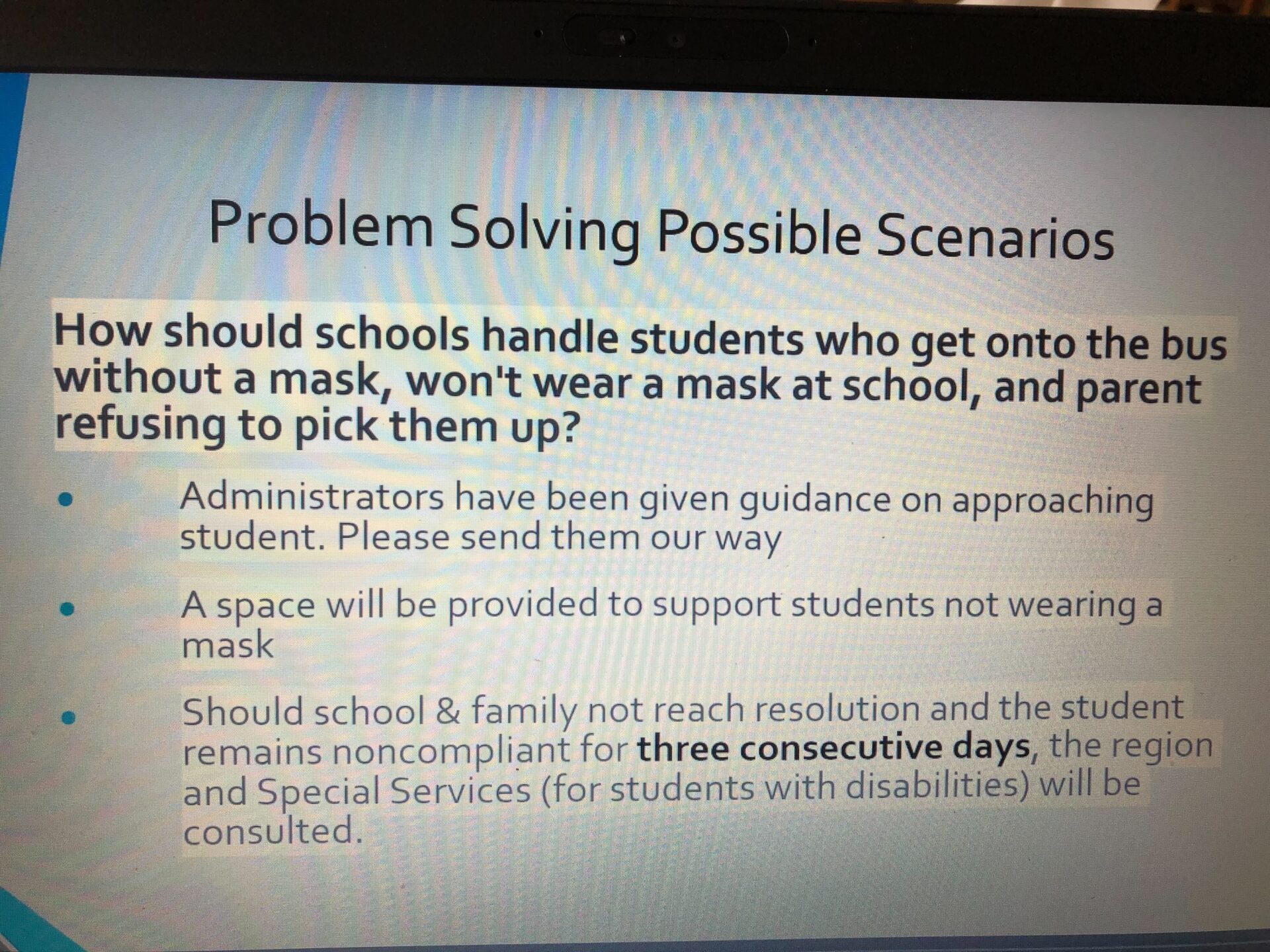 The principal’s briefing includes a slide that discusses a “last resort” for students who won’t comply with wearing a mask in this particular FCPS school in Virginia.

“Consider engaging a trusted adult to attempt to persuade the student to comply,” the slide reads.

Forced coercion should go over very well with parents who are tired of school officials forcing masks on their children.

“If that does not work, and the student continues to defy directives,” the slide reads, “use your security staff to escort the student from the classroom to another area.”

Read that again. The school is threatening to have a child removed from class by security, presumably in front of their peers, for the crime of not wearing a mask.

Furthermore, the teacher advises, those removed from the classroom are to be marked “unexcused” which could potentially cause problems for both the student and the parent as it relates to truancy. 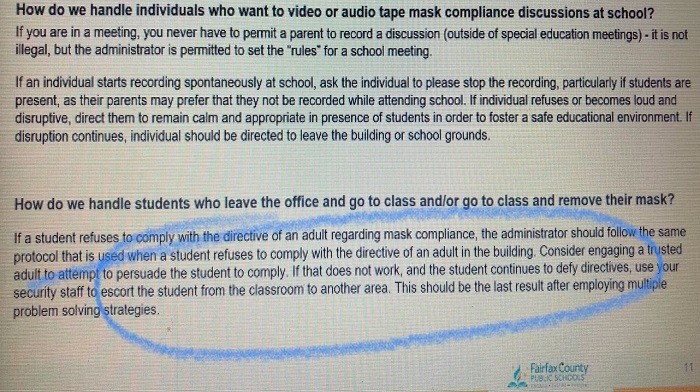 The long-tenured teacher points out that the school district is using the Centers for Disease Control and Prevention (CDC) for direction on their mask rules.

“FCPS continues to state that they are following the guidance from the CDC,” the teacher tells The Political Insider. “That guidance has changed constantly. Many no longer trust the CDC.”

“People have lost faith,” they add.

A new poll backs up this assertion, with just 44 percent of Americans having faith in what the CDC has communicated about COVID.

And when faith and trust are lost, today’s education authorities, at least in this instance, resort to coercion, segregating students based on mask compliance, and threatening them with security if they do not fall in line.

The Virginia school in question certainly does not want its efforts to force masks on children out to the public, with another slide in the presentation advising school officials to avoid interaction with the media.

“Do not respond to emails, phone calls, or in-person media requests,” one slide advises.

“As a caring culture, we work to inform and educate rather than engage in confrontation,” the school adds.

“When is the end in sight?” the long-tenured FCPS teacher asks. “Are we going to mask our students every year, only in the winter, when there is a random cold, flu virus going around?”

Make no mistake – we’ve traveled down the slippery slope these last couple of years – and, as such, any issue, no matter how low the risk is for children, will result in further debate about masks and/or distance learning.

Parents need to continue fighting back. And having the help of teachers who recognize the ridiculous nature of the mask and vaccine mandates would help in that battle.