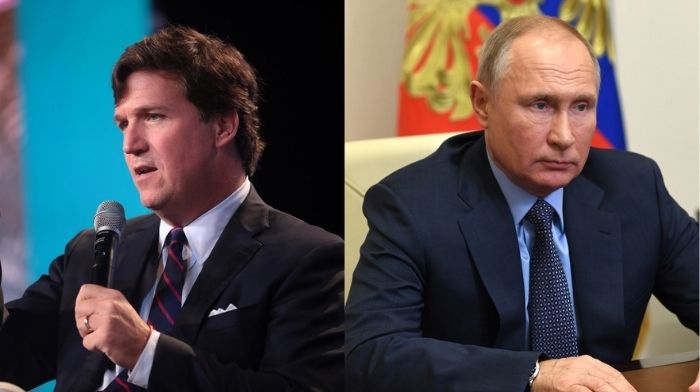 As tensions in Eastern Europe continue to escalate, Defense Secretary Lloyd Austin announced on Monday that 8,500 U.S. troops have been placed on “heightened alertness to deploy.”

NATO also announced that it would be sending more ships and fighter jets to the region as a counter to what the West has described as a Russian buildup on Ukraine’s border.

U.S. officials from President Joe Biden to Vice President Kamala Harris and Secretary of State Antony Blinken have been increasingly saber rattling over the issue, warning of dire consequences (along with sending military personnel and equipment.)

But Fox News Channel host Tucker Carlson asked the questions no one else in the major media, or Congress, seems to be asking: “Who benefits from going to war with Russia?”

Over the last few nights, Tucker has explored the purpose of this. Is Ukraine’s border really a pressing national security concern for America?

Tucker Carlson’s Opening Monologue: Who Will Benefit From War With Russia?

“If the Neo-Cons aren’t restrained, and soon, Americans are going to be a lot poorer.” pic.twitter.com/fauvHT49n4

RELATED: Whoopi Goldberg Blasts Bill Maher Over COVID-19 Comments: ‘How Dare You Be So Flippant’

It might seem odd that American politicians are going apoplectic over the border in Ukraine when they seem to have no interest whatsoever in our border right here in the U.S. that is a disaster. Particularly given the record-breaking failures on our own homefront.

Tucker wants to know why, and said this on Friday:

“A bipartisan coalition of neocons in Washington has been recklessly stoking conflict between those two countries for years now. Our foreign policy establishment, in fact, has sent hundreds of millions of dollars in weapons to one of the most volatile regions in the world, hoping for some kind of explosion. And now their wish seems to be coming true. That explosion looks like it’s on its way, and it could very easily suck the United States into the center of it.

“We’re really going to fight a war over some corrupt Eastern European country that is strategically irrelevant to us? With everything else that’s going on right now in our own country? No normal person would ever want to do anything like that. How can it really happen?”

As for how serious the situation really is, Tucker had this to say:

“And to be clear, we’re talking about an actual war here. Not a protracted series of airstrikes against some impoverished dirt patch they’re telling you is an existential threat to the nation. Russia is not a rock. Russia has nuclear weapons and a real army. A war with Russia is not a joke. It won’t be over in a week.”

Indeed. It’s unclear whether the political class in Washington has thought this through. Coming off the disaster in Afghanistan, it might boggle the mind to imagine they are ready to jump right back in, especially with a nuclear power.

And if you wondered how casually and assured of themselves they are, watch VP Kamala Harris commit the nation to war:

VP HARRIS: “I am being briefed on a constant basis by my national security team … Any aggressive action taken by Vladimir Putin will be met with severe consequences … We are prepared to take decisive action if he moves in an aggressive manner into Ukraine.” pic.twitter.com/sOsCVWECY5

Delving into the topic again last night, Tucker identified one country that will most certainly benefit from a broke America getting bogged down in another war.

The harm to America was summed up thusly:

“The fact is, Ukraine is strategically irrelevant to the United States. No rational person could defend a war with Russia over Ukraine. Nobody thinks a war like that would make America safer or stronger or more prosperous. Have you taken a look at our economy recently? Dangerous levels of inflation, a workforce in disarray. Wildly chaotic swings in financial markets, in case you ever noticed.

“Well, joining a conflict in Eastern Europe fix any of that? Come on. Of course not. It’ll make it worse. If the neocons aren’t restrained, and soon, Americans are going to be a lot poorer.”

As for who benefits? China – who is just itching to knock America off her pedestal as the world’s sole superpower:

“But what’s not at all complicated is who benefits from our conflict with Russia. China benefits, period. The Chinese government is the only certain winner here. We can give you many examples to illustrate this, but consider the latest economic sanctions the White House has proposed against Russia.

“The Biden administration may use something called the foreign direct product rule to cut off Russia’s supply of semiconductors made with American technology. This would, in the hopeful assessment of The Washington Post “Potentially deprive Russian citizens of some smartphones, tablets and video game consoles.”

“So depriving Russian citizens is good, we’re told, because Russian citizens are bad. OK, but what are the long-term effects on us? Russians are still going to have smartphones. They’ll just get their components somewhere else, meaning from China. The Chinese have already pledged to help, and they have every incentive to make good on that promise.”

If Russia and China were able to work together to supplant the U.S. Dollar as the world’s reserve currency? Chaos.

As many skeptics have famously pointed out on the eve of wars, who benefits? Tucker asked the same question:

“Polls show that most Americans are completely opposed to fighting Russia over Ukraine because they’re not demented. But you know who’s very much in favor of it? Well, defense contractors, including Pentagon Chief Lloyd Austin’s former employer, Raytheon.

“For defense contractors, war means massive profits by definition. In just the last few years, the U.S. has spent more than $2 billion on military aid to this nation called Ukraine that most people couldn’t identify on a map.”

Tucker also looked at who is promoting war. A few examples.

On January 18, Politico ran a story entitled, “Psaki: ‘Russia could at any point launch an attack in Ukraine.” A closer look at the story tells the actual story.

Under the “Politico” banner, it’s revealed that the article pushing for war has been sponsored by none other than the weapons manufacturer Lockheed-Martin.

A Washington Post opinion piece dated January 20 entitled, “Biden must show that the U.S. stands ready to support Ukraine, militarily if necessary.” The story was written by Michael Vickers.

There is a short biography of Vickers above the article. What it leaves out is that Vickers sits on the board of BAE Systems, another giant weapons manufacturer.

Whether you agree with Tucker’s view on the matter, or his conclusions, we should all be wondering why, in the age of 24/7 media coverage, there seems to be only a single person on a single network asking these questions.

America is moving towards war with Russia, and the media is encouraging it. pic.twitter.com/hE9Hv8Xu63