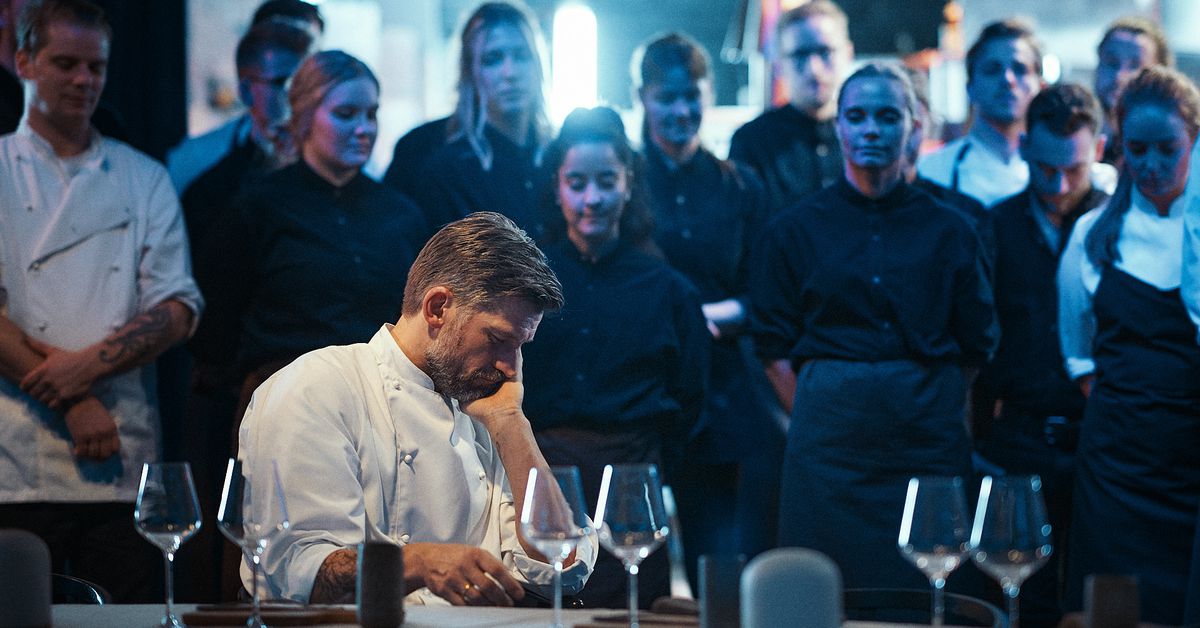 There’s no shortage of movies that explore fire and passion required from ambitious restaurateurs. From Chef to Big Night, and even Burnt or Ratatouille, the passionate, high-stress pursuit of opening and working in restaurants is easy fodder for dramatic tension. But in A Taste of Hunger, the latest film from director Christoffer Boe, the restaurant merely serves as a setting for a crumbling marriage.

The film stars Game of Thrones’ Nikolaj Coster-Waldau as Carsten, a perfection-obsessed chef at the helm of Malus, a top-tier Copenhagen restaurant in hot pursuit of its first Michelin star. Carsten lives next door to Malus, which he runs with his wife Maggie (Katrine Greis-Rosenthal). Everything seems pretty perfect until Carsten discovers an anonymous letter, written originally to him but found by Maggie before he saw it, telling him that she’s in love with another man.

Eater spoke with Boe and Coster-Waldau about what makes a restaurant the perfect backdrop for relationship drama, how to bring nuance to age-old narratives about volatile chefs, and why the humble hot dog — which features heavily in A Taste for Hunger —is the perfect food for bringing people together.

Eater: First things first, for the Game of Thrones fans: Would [your character] Jaime Lannister have been a good cook?

Nikolaj Coster-Waldau: It’s funny you ask. There was a scene that, for some reason, was cut from the final show, where Jaime is creating this lasagna for his sister Cersei and Brienne of Tarth. He was trying to convince them into some kind of open marriage thing, so he thought it would be a good idea to bring them together and talk about this while he cooked this lasagna. I thought it was a beautiful scene, but the creators thought it was too complicated, all the layers of that storyline.

Must’ve been tricky to film that scene with just one hand.

NCW: Very tricky. But he actually uses his golden hand to rinse the water away from the pasta. He would dump the pasta in his hand, put a bit a meat on top, and feed them.

As you prepared to portray Carsten in A Taste of Hunger, which chefs did you look to as inspiration?

NCW: I spent some time in Copenhagen with Rasmus Kofoed, who runs a restaurant called Geranium. He’s just an incredible chef — he won the Bocuse d’Or in 2011, he’s been a coach for other countries. He was very gracious, and he spent a lot of time helping me understand not only the food, but the kind of passion and focus and work ethic that goes into creating something like what he’s created, and what my character wants to create in the movie.

When I was there, the restaurant was serving lunch, and he asked if I wanted to go into the kitchen. I laughed and said “Great idea, what could possibly go wrong there? But okay.” He put me in charge of cutting out these little tiny flowers that were decoration, but it was pretty cool because I got to hang out with all these other chefs and just talk to them. He definitely made sure that I couldn’t destroy anything. Copenhagen is just very lucky. We have a lot of incredible chefs, and this whole world of eating has just changed so drastically now. Chefs are superstars now, and what they do is art. It has a whole different type of weight.

Christoffer Boe: As I was writing the script, I went and visited a lot of restaurants and talked with different chefs. When we were in pre-production, I took the actors to different restaurants and had them experience these rooms, talking to the chefs and the waiters so that they could understand the whole deal of how to make a restaurant happen. Just about when we started shooting, Rasmus Monk opened up Alchemist, which became very famous, and he runs that with his wife. I took inspiration from how they do this business together, basically together 18 hours a day, and have been doing that for seven years.

Do you consider yourself people who are “into food,” the type who would go to a restaurant like Malus?

NCW: I like food, but it’s not like I have to go to an amazing restaurant all the time. I like a food truck as much as a fancy restaurant, but I do go now and then. I like to give friends or my wife that experience. For a couple years, while I was filming Game of Thrones, we had a bet every year where the loser had to take the others to the best restaurant in the world, which was incredible. But that’s a once-a-year type thing.

Is there something specific that makes the physical act of cooking work differently on screen than, say, sword-fighting when you’re playing Jaime Lannister?

NCW: Cooking is a form of communication. Obviously we need nourishment, but it’s more than that. As an actor, it was really interesting for me because the best chefs in the world are able to turn their food into an extension of their personalities and are able to convey that to the customers.

In media and in culture more broadly, there are a number of tropes associated with chefs — they’re volatile and sometimes abusive. How did you seek to portray a chef in a different way than in other films?

NCW: He does have a temper, because there’s a lot of pressure involved in these things. This couple has put their whole life savings into this restaurant to fulfill this dream. That’s stressful. It was interesting because all the extras that you see in the movie are people who work in the restaurant business, people who had spent a lot of time in kitchens, and they could tell me if what I was doing felt natural.

There’s a scene where Carsten loses his shit, and fires a sous chef. It’s very tense, and I asked the extras if this was normal, and they all said “we’ve been there.” Every one of them had stories about people throwing stuff at them or yelling. So it is kind of a cliche when you hear about a chef having a bad temper, but these kitchens are tense. These experiences aren’t great, but they are real. From their perspective, the good guys are the ones who come back after they blow up to make it right.

Christoffer, is that why you chose a restaurant to serve as the setting for this story that’s centered on a crumbling marriage?

CB: Restaurants themselves are just very filmic, inherently. You can see that by opening Netflix and seeing how many food shows are out there. It’s very aesthetically pleasing, and these places are very reflective of the humans and cultures and ideas that are put into them. The industry is full of people who are cut-throat and ambitious, who want to have these Michelin stars.

The movie itself is very sexy. Was it natural to weave that sensuality into this story about an intense environment like a restaurant?

CB: There are few constants and basic elements of life, and love and sex and food are most of them. For many thousands of years, our basic endeavor has been to provide food for ourselves and in doing that, we share it with each other and connect with other people. In that sense, there is something very intimate about food. One of the first things anthropologists do when they’re studying different cultures is look at how those people share food, how they cook. It really is a way into the human heart, and in more ways than just romance. We need to have food, and it could be so basic, so cheap, that you could just eat and never think about it, but people put so much passion and work into it and turn it into art.

Even though it is about a modernist restaurant, the central dish in A Taste of Hunger is a classic Danish hot dog. It brings Maggie and Carsten together more than once. Why a hot dog?

CB: In Denmark, we pride ourselves on having a very sophisticated hot dog, but it’s still a very simple, fast food. It’s something that most people are familiar with, and when you talk to chefs, they’ll tell you that the hot dog is the perfect umami dish. It’s got all the things you desire in food — the familiarity, the warmth, the different flavors blending together. Even though they are seeking to achieve this incredibly pristine food, what saves them in the end is a cheap hot dog.

A Taste of Hunger is set for release in theaters and on-demand on January 28.