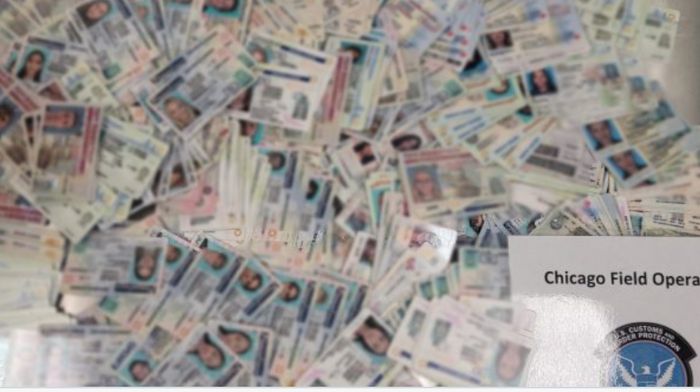 On Friday, Customs and Border Patrol agents seized several containers carrying more than 1,000 fake American driver’s licenses in Indianapolis that had recently been smuggled into the U.S. from Hong Kong.

Another shipment seized last week contained more than 1,200 fraudulent driver’s licenses. The containers were bound for addresses in Chicago and New York. The contents were labeled as “Game Card” with a value of $20.00. The three containers held 358, 482, and 367 fake identifications.

According to CBP, most of the fake driver’s licenses were for college-age people. Many of them had the same picture but different names. The fake IDs represented more than 20 states.

While fake IDs have long been the arena of underage young adults trying to purchase alcohol or get into bars, LaFonda D. Sutton-Burke, Director of Field Operations-Chicago says that it is a crime that has migrated to the dark web, and is being used for more sinister purposes.

“Some of the major concerns as it relates to fraudulent identity documents is identity theft, worksite enforcement, critical infrastructure protection, fraud linked to immigration-related crimes such as human smuggling and human trafficking, and these documents can be used by those individuals associated with terrorism to minimize scrutiny from travel screening measures.”

Another thing a fake ID can be used for? Voter fraud. Who holds an office has become the most valuable thing in America, unfortunately. https://t.co/JqQKoNc5Yu

No Signs Of Slowing Down

The import/export of fake American driver’s licenses is a business that appears to be on the rise. Last month in Cincinnati, CBP agents seized 617 shipments of “fantasy documents,” those that are not the issue of a U.S. government agency, and therefore are not recognized as an official travel document or otherwise by the U.S. government.

Many times they are used as “breeder documents” something that serves as a template for other sorts of illegal documents. Cincinnati Port Director Richard Gillespie stated, “Producing these documents without proper authorization and oversight is illegal.”

Not A New Thing

While it is common knowledge that identity theft is a consequence of living in the digital age, the advent of mass quantities of fraudulent American driver’s licenses coming into the country is nothing new.

Fox News channel was reporting on an influx of fake driver’s licenses coming into the country from China in August of 2020. CBP officials say that young people, who tend to be more lax with personal information may be the biggest assistants of criminals abroad when it comes to the manufacturing and importing of fraudulent driver’s licenses.

CBP says it periodically conducts inspections of arriving and departing international flights to look for things like fraudulent driver’s licenses at the nation’s 328 international ports of entry.