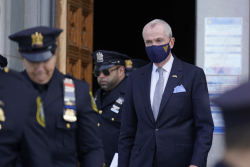 As I write this, media outlets have just declared that Phil Murphy has won New Jersey’s race for governor. Murphy has less than a 1 percentage point lead, and a significant number of votes remain uncounted. Nonetheless, the Associated Press was eager to declare the election settled – no doubt in part because editors there knew that the longer it went without a declared winner, the more conspiracy theories would flourish.