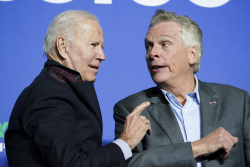 On Saturday, it was former President Obama who made fun of Glen Youngkin as a goofy “fleece-wearing guy,” symbolism that President Biden further cribbed on Tuesday to knock the Republican candidate for governor. Obama had tried tying Youngkin to the stolen-election conspiracy theories that led to the U.S. Capitol riot on Jan. 6; Biden also argued that Youngkin was complicit in “the big lie.” Obama promised that Terry McAuliffe would “rebuild a stronger economy that creates good jobs.” Again, Biden said the same.

Democrats don’t mind a little presidential echo, especially when Biden and Obama are the ones delivering the one-two punch. And yet, in one area Obama went, Biden was hesitant to follow.

“We don’t have time to be wasting on these phony trumped-up culture wars, this fake outrage that right-wing media peddles to juice their ratings,” Obama said in his Richmond speech, accusing Youngkin of avoiding “serious problems that affect serious people” and “stoking anger” at educators.

A Washington Post headline three days later, however, seemed to undercut that message: “Judge finds teen committed sexual assault in Virginia school bathroom.” It was disturbing news, and it dovetailed with Youngkin’s closing argument, one the GOP is beta-testing ahead of the midterms: Thanks to liberal policies, our children are in danger.

“I am calling for an immediate investigation into the Loudoun County School Board for their gross negligence,” Youngkin said a week before a juvenile court judge handed down what amounts to a guilty verdict. “They had a duty of care and they failed,” he told a cheering crowd at a campaign stop in Burke. “They endangered our students and violated the Virginia Constitution.

“Instead of investigating parents, the DOJ should be investigating those who covered up a heinous crime in our schools,” Youngkin added in a reference to a recent Department of Justice memo about stepping up investigations of threats of violence against teachers and school board members by parents angry over education policies.

The McAuliffe campaign responded to that last call by issuing a statement that the Republican’s “entire campaign has been based on Donald Trump’s divisive conspiracy theories, and tonight we saw more of the same — angry Trumpian conspiracy theories and constant threats against public school funding.”

McAuliffe did not shy away from continuing that argument Tuesday night. He said it was his opponent, not himself, who was foisting a bitter fight over social issues onto schoolchildren. “Glenn Youngkin uses education to divide Virginia,” the Democratic nominee said. “He wants to pit parents against parents, parents against teachers. He wants to bring his personal culture wars into our classrooms.

“Folks, we will not allow Glenn Younkin to bring his hate and his chaos in our Virginia schools. And we will never let our children be used as political pawns.”

As the Washington Post reported, the male teen in question sexually assaulted a classmate in the girls’ bathroom of a Loudoun County high school in May. The male student pushed the 14-year-old female victim to the floor and forced her to perform sex acts. Although the parents of the victim have described the boy as “gender fluid” and said he was wearing a floor-length skirt, those details were not confirmed by authorities. What has been confirmed is that the juvenile perpetrator was transferred to another school and allowed to attend classes while awaiting trial. There, months later, the teenager allegedly assaulted another female student — a case that will go to trial next month.

Even before the defendant was found guilty of the first charge, some Virginia parents were fuming at Obama’s remarks. This includes Jason Miyares, who told RealClearPolitics that the former president should “go to the female victim that was 14 years old and got violently sexually assaulted in a bathroom and look her in the face and tell her this is a phony culture war.”

Miyares, the GOP candidate for Virginia attorney general, called the assault the result of “a bunch of far-left politicians who think that good intentions guarantee good results. And they never think about the unintended consequences of their actions.”

Before the judge handed down a verdict and before Biden headed to Virginia to stump for McAuliffe, students in Loudoun County walked out of class Tuesday to protest the assault. Scott Ziegler, the school system superintendent, acknowledged earlier this month that existing policies are “not adequate” to address such cases. Fox News reports that Ziegler acknowledged allegations of the bathroom assault  in a May email to the school board. But at a June board meeting, where the father of the victim was arrested, Ziegler said the school didn’t have any record of an assault occurring and claimed that “the predator transgender student or person simply does not exist.”

Combined with allegations of a coverup, the controversy has fueled longstanding conservative complaints that the public school system has become increasingly liberal and untethered from parental input. Republicans like Youngkin say that classrooms are already too politicized, and they blame progressives for pushing lesson plans influenced by critical race theory and backing initiatives to let biological males compete in girls’ sports. In almost each case, they insist that they are not the aggressors.

The détente Schilling referred to was an effort by then-Indiana Gov. Mitch Daniels in 2011, when he called for a “truce” on social issues between the left and the right so the country could deal with “the new red menace” of debt and deficits. Pointing to Obama’s federal transgender bathroom guidance as evidence, Schilling said the truce ended up being “entirely one-sided and ended up being a total slaughter. It was a massacre, and so there’s no going back. Culture wars are here to stay. They won’t go away until Democrats stop aggressing.”

Youngkin and McAuliffe are currently locked in a neck-and-neck race. According to the RealClearPolitics polling average, the Democrat leads the Republican by just 1.5 percentage points as the come down the final stretch. Both candidates are aggressively courting suburban women — a constituency that Patrick Murray, director of the independent Monmouth University Polling Institute, notes were “crucial to the sizable victories Democrats have enjoyed in the commonwealth since 2017.”

Republicans are bullish about their chances and hopeful that Virginia could be a harbinger of good political fortunes to come. The state has certainly been a reliable bellwether in the past. Democrat Ralph Northam won the governor’s mansion in 2017, portending his party’s reclaiming the House of Representatives in a 2018 rebuke of Donald Trump. In 2009, Republican Bob McDonnell’s gubernatorial victory previewed “the shellacking” that Obama experienced in the 2010 midterms.

Lessons learned in Virginia will not quickly be forgotten. According to Schilling, “If Youngkin can win this race in deep blue Virginia, the 2022 midterms are going to be all about critical race theory, transgenderism, and these culture wars that Democrats now want to back away from.” A successfully waged culture war in the commonwealth, he said, would leave the GOP with a single takeaway: “It will win your campaign.”

Biden does not seem afraid of that kind of Trumpian fight, even if he avoided echoing Obama’s culture war rhetoric. He seemed to be goading his former opponent into weighing in on the race, something Virginia Republicans believe would only complicate Youngkin’s chances. They are eager to avoid yet another referendum on the past president.

“How well do you know Terry’s opponent?” Biden asked the crowd. “Remember this: I ran against Donald Trump. And Terry is running against an acolyte of Donald Trump.” Why, he continued, isn’t Trump alongside Youngkin on the campaign trail? “What’s he hiding? Is he embarrassed?” Populist extremism, the kind that embarrasses Republicans, can “come in many forms,” Biden warned, referencing the mob that stormed the Capitol after Trump’s speech to supporters on the Ellipse.

Or, Biden added, again borrowing from Obama, “it can come in a smile and a fleece vest.”