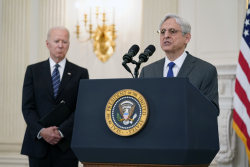 As a candidate, Joe Biden promised to “restore the soul of the nation” and “unify” America. His presidency would be a return to normalcy, left-wing pundits proclaimed. “The adults are back in charge.” It’s been nine months since Biden was sworn in as president and so far, he and his administration have done everything they can to break that promise.

Take, for instance, Attorney General Merrick Garland’s response to a letter from the National School Boards Association complaining that parents protesting the radical propaganda being taught to their children “could be the equivalent to a form of domestic terrorism and hate crimes.” The NSBA even suggests that parents might be investigated and punished under the PATRIOT Act, the anti-terrorist legislation passed in the wake of the 9/11 attacks. Garland declared that the Biden Justice Department is “committed to using its authority and resources to discourage these threats, identify them when they occur, and prosecute them when appropriate.” In Biden’s America, concerned parents protesting the indoctrination of their children is a threat worthy of investigation and punishment.

Or how about Biden’s inflammatory and false assertion that election integrity laws in Georgia and Texas are a “21st-century Jim Crow assault” on voting rights. After smearing these states by suggesting that racism is the underlying motivation for the laws, Biden announced he would use the power of the federal government to go after states that pass these election integrity laws. According to Biden, those who want free and fair elections for all Americans are racist. Such rhetoric is hardly unifying or healing — especially when support for voter ID laws has risen 13 percentage points among Black Americans and stands at 81% among all voters.

Similarly, in his speech announcing a nationwide COVID-19 vaccine mandate for many businesses and more than 80 million workers, Biden pitted Americans against each other. “We’ve been patient, but our patience is wearing thin,” he said. “And your refusal has cost all of us.”

An American president threatening fellow citizens is an unprecedented tactic. Freedom and self-government are core values of this nation — not coercion by unelected, unaccountable bureaucrats in Washington. Not only is such a federal decree blatantly unconstitutional, but it forces small businesses to expend their own resources to pay for weekly coronavirus tests or force their employees to be vaccinated or be fired. That’s a burden to businesses that have already been stretched thin after months of Democrat-led shutdowns and extra unemployment benefits that have incentivized workers to stay home. The Biden administration is squandering the economic recovery it inherited from President Trump and Republicans and trampling individual liberties in the process.

Apparently, worried parents, voters who want a secure ballot box, and Americans who have opted not to get the vaccine are worthy of national shaming. But when Biden was asked about footage of Democrat Sen. Kyrsten Sinema being followed into the bathroom by leftists protesting her refusal to support his $3.5 trillion Build Back Better bill, Biden laughed. Such harassment “happens to everybody” he said. It’s “part of the process.” Is this what he meant by restoring civility and decency?

Far from bringing the country together, Biden’s administration has sown division at every opportunity. They’ve turned Americans against one another, framing half the country as potential terrorist threats and public health dangers. These are serious trends that threaten the stability of our country and ability to withstand attacks both at home and abroad. As Lincoln warned, “A house divided against itself cannot stand.”

This administration has proven that results — not rhetoric — are what matter. That’s a lesson voters will take with them to the polls in 2022.

Ronna McDaniel is chairwoman of the Republican National Committee.