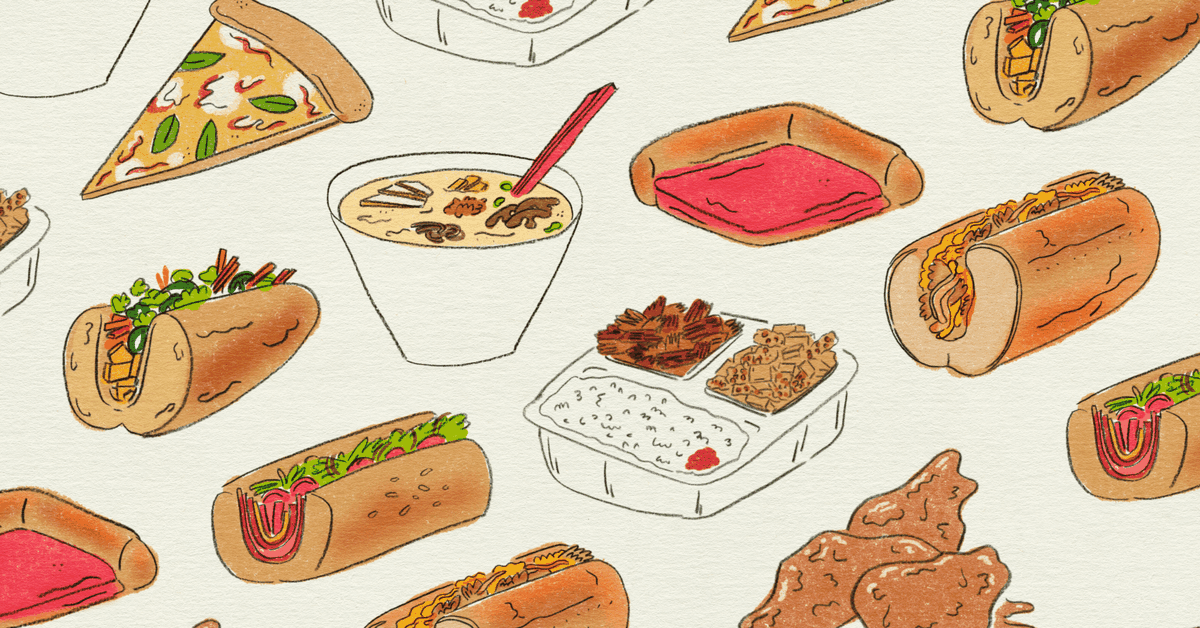 Great vegan food is easy to come by in Philly — but some dishes stand above the rest. For exciting ingredients and convincing meat alternatives that are as affordable as they are delicious, here are the 8 essential vegan dishes to try in Philly, in illustrated form.

Most vegan jackfruit dishes these days are prepared to mimic pulled pork, but Hardena’s weekend-only Indonesian gudeg stewed jackfruit is the perfect sweet and savory stew that doesn’t try to be faux meat. You can add it to any combination platter, but it’s best alongside the vegan tofu and tempeh served over rice. Pro tip: Ask for the house-made sambal hot sauce.

Blackbird used to be a pizzeria, but pivoted to strictly sandwiches and wings during the pandemic. The spicy sweet seitan wings are so satisfying when you’re craving vegan bar food. Seitan wings run the risk of being too spongy, but Blackbird’s wings consistently have a fried crisp exterior with a meaty inside. Plus, they come with a side of celery and cucumber ranch that rounds out the entire dish.

20th Street Pizza, which is also owned by the folks at Blackbird, is an excellent all-vegan pizza shop that makes naturally leavened sourdough pizza. If you’re only ordering one pie, go for the plain cheese for a vegan take on a traditional margherita pizza — but you really can’t go wrong with any of 20th Street’s pies. If you want to try a bit of everything you can also check out the in-store slice options as well.

If you’re looking for a first-rate vegan cheesesteak, you can’t go wrong with the cheesesteak from Triangle Tavern in South Philly. The seitan in the cheesesteak has a nice firm texture, it comes topped with grilled onions, and is smothered in a vegan Cheese Whiz sauce that’s just as yellow as the real thing. The sandwich is gooey but doesn’t fall apart thanks to the firm and fluffy roll from Liscio’s Italian bakery. Truly a well-balanced and tasty vegan cheesesteak.

Luhv Vegan Deli is a family-owned vegan deli counter that makes its own vegan meats and cheeses, and they all come together in the Italian hoagie, exclusive to its Reading Terminal Market location. This hoagie has an even meat-to-veggie ratio and the greens are nicely dressed to provide the acidity and moisture you’d expect of a typical Italian hoagie. You can even order the deli meats by the pound to take home.

Head to South Philly for a filling yet light tofu banh mi from Ba Le bakery, a family-owned bakery and Vietnamese sandwich shop established in 1998. Ba Le’s banh mi comes with a generous portion of thinly sliced fried tofu, pickled daikon and carrots, cucumbers, cilantro, and raw jalapenos. Aside from the tasty filling, the star of the show is definitely the in-house baked bread roll which has a crunchy exterior and airy interior that makes this sandwich a necessary addition to any vegan lunchtime.

Vegan ramen can be lackluster, but Tomo Sushi & Ramen makes a vegan ramen that’s just as rich and decadent as its traditional counterpart. Tomo’s vegan yasai ramen has a creamy soybean and vegetable broth that comes topped with black garlic oil, bamboo shoots, shiitake, black fungus, and red ginger and scallion, but the most unforgettable component of this dynamic dish is the seitan teriyaki topping, which is crunchy and crumbly. The yasai ramen is the only ramen bowl on the menu that comes with the seitan topping, so it’s a must-try.

Beware: Tomato pie isn’t always vegan, since it sometimes gets sprinkled with parmesan cheese, but Cacia’s is vegan, simple, and excellent. You can order it by the slice or order a whole pie for under $12. It goes great as a midday snack or a whole pie for dinner — either way you win with this humble and classic Italian treat.